How freaking delicious does that look?! I mean, how could I NOT lead with this picture?  This, my friends, is a meatball bake.  Yes indeed!  Hidden under all of that gloriousness are meatballs.  Who would’ve known?!

Paleo confession time: I crave traditional comfort foods all the time.  Seriously, ALL the time.  For me, these foods are usually something really starchy, smothered in a red sauce and baked, or anything covered in Gravy.  I’m German and Irish.  We are gravy loving, potato smashing folks.  I can’t deny my genetics, nor can I refuse these tasty, tasty foods. So I’ve tried desperately to find ways to satisfy these cravings….and since I’ve YET to find an epic gravy recipe that comes anywhere CLOSE to being Paleo, I usually go the smothered in red sauce route to feed my hungry soul.

Paleo Confession #2:  I eat cheese.  Sue me.  Most of the time I shoot for raw milk or grassfed cheeses, but sometimes I don’t. Don’t care.  If some cheese is going to bring me to an early death, bring it on!

So my friends, enjoy! And don’t judge me too harshly for the aforementioned confessions.

For the sauce topping:

There it is peeps.  Get after it!  Fill your bellies with simple goodness.  Make it happen.  And live it up with your naughty paleo selves. 🙂

Ok, so life has been one crazy joy ride after another……here’s a brief update.

The holidays came and went without much to do.  This was actually a blessing in disguise, as it allowed for plenty of rest and relaxation for what was to come.

This semester at school is completely insane.  I’ve taken on some extra responsibilities with curriculum writing for my district, as well as teaching a course at a university here in town.  In addition to that, I’ve made up my mind.  I’m officially relocating.  I can’t say as to where exactly yet, but it will be out of state…..still waiting on a couple of pieces to fall into place before I can announce where I’m heading.

All of that being said, I haven’t been cooking anything worthy of posting.  Honestly.  I’ve been keeping things SUPER basic….with a few tricks up my sleeve here and there.  The biggest reason for that is that I don’t like to junk up my kitchen or stink up my house.  Selling my house has been priority #1, and to do that efficiently, people don’t want to truly see a lived in kitchen or smell bacon in the air………although I know a HUGE selling point for me would be Eau De Bacon, but apparently that’s a no no for most buyers.  Whatever, I don’t judge.

Living in my house has become a relative term.  I feel like it’s still mine, but it’s already gone. Like I’m living in a museum of what used to be my home.  It’s an indescribably bizarre feeling. Buying that house 5 years ago was my way of asserting my adulthood.  Proving that even though I wasn’t engaged, getting married, or spawning children, dammit, I was a grown up.  So I went and got myself a mortgage.  And that’s all 30 days from being over.  Needless to say, I’ve been a bit weird about it.

In spite of everything, I can’t help but be crazy stupid excited about the future.  I have been having moments where I start to freak out about where I’m going to live, how I’m going to pay rent, how the hell I’m going to afford a CrossFit membership somewhere, how I’m going to buy groceries….but in the end, I don’t care.  It’s gonna happen.  I can feel it.

So here’s to new adventures! Whichever direction they take me……and oh yeah, this happened too: 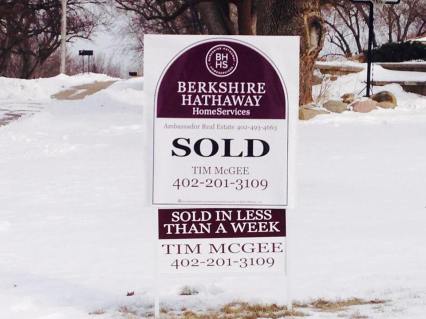 Recipe to come soon…..but in the meantime, call my boy McGee.  He’s the jam, and gets things DONE!